This is the third of seven items in seven days on left handedness.


Throughout history and across the world, the societal response to left handedness has varied, but mostly been negative.

(N.B.: This item is incomplete due to personal time contraints.  I will add more in the next few days.)

In nearly all languages, "left" has negative connotations and "right" has positive ones.  "Left" is usually accociated with either being weak, dishonest, incapable, sneaky, evil or female.  Terms abound:

Negative connotations of the word infest politics, and not because "left" often means socialist or communist.  In parliamentary democracies (e.g. England, Canada, Australia, etc.), the "Speaker of the House" represents the queen of England, and by extension, the mythical christian "god".  The governing party always sits to the right of the Speaker ("god's" favoured side) while the opposition ("the enemy") sit on the left.

Every religious views I could find items on described right as "good" and left as "bad".  There was no dissent to be found. 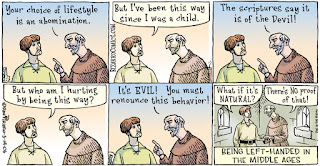 Use of the left hand is considered "disrespectful" in islamic countries. The left hand is the "toilet hand" and thus "unclean" for handling things, especially food.

A claim about judaism is repeated in many places, but I cannot find an original source:


The medieval jewish philosopher Maimonides listed 100 blemishes a jewish priest could not have, and being left-handed was one of them.

Negative attitudes towards left handed people are pervasive and worldwide.

The Soviet Union institutionalized the forced switching of children's hands and attitudes in post-Soviet Russia really haven't changed much.

ASSASSAN, Ghana, 3 September 2014 – When Benedicte Bon-Farson was a young girl in grade 3, she didn’t want to go to school. “Anytime I got up to go to school, I feel like, ahh!” she recalls, many years later.

Ms. Bon-Farson is left handed, and because of this, her grade 3 teacher constantly ‘caned’ her – punished her by hitting her with a cane.


India also bases its anti-left attitudes on "tradition" and religion.

Indonesia has many of the same attitudes as most muslim countries.

New Zealand and South Africa's past churns my stomach.  From "The Left Stuff: How the Left-Handed Have Survived and Thrived in a Right-Handed World", by Melissa Roth (2005):


The Maori of the South Pacific were known for enforcing some of the most severe sanctions against the left handed.  They believed the right side to be the "side of life" whereas the left represented the side of death.  Women were required to weave ceremonial cloth with the right hand, as the left hand would profane and curse the cloth.  If they used their left hand to weave, they could be killed.

A continent away, the Zulus of southern Africa poured boiling water into a hole and then placed a child's left hand in it, with the intention of scalding it so that it could not be used.